Scan Before You Replace

Thankfully, rather than simply doing a quick visual assessment of the roof and deciding it needs to be replaced, today’s roofing professionals can rely on several different non-destructive moisture tests to help make solid recommendations based on unbiased scientific information. The decision of when to repair, restore or replace a large commercial roof often involves a million dollars or more. 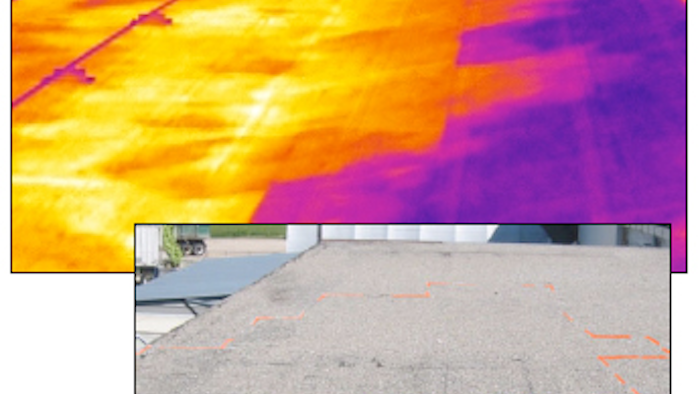 You are feeling a little under the weather and finally make an appointment to go see your family doctor. He does a cursory examination, and decides you need surgery immediately. Wouldn’t you want a more thorough exam? What about a CAT scan, an MRI, an EKG, or some other tests? Wouldn’t you want more information on what is wrong before the surgery? Wouldn’t you want some scientific evidence that you need the surgery? This evidence allows doctors to pinpoint exactly what is wrong and target the problem area. Advanced imaging techniques provide crucial information for medical professionals. Similarly, nondestructive moisture tests provide roofing professionals valuable information concerning the moisture content of roofing insulation.

There are several reasons why it is important to identify wet insulation trapped within a commercial roofing system. For example:

Thankfully, rather than simply doing a quick visual assessment of the roof and deciding it needs to be replaced, today’s roofing professionals can rely on several different non-destructive moisture tests to help make solid recommendations based on unbiased scientific information. The decision of when to repair, restore or replace a large commercial roof often involves a million dollars or more. Before you make a million dollar decision, building owners should insist on more evidence to support the recommendation.

Infrared Themography, also known as an IR scan, is a non-destructive test method to detect and record temperature differences across the surface of an object. IR scans are the most common moisture detection method for identifying wet insulation on commercial roofing systems. During the day, wet insulation will absorb much more heat energy than dry insulation. At night, this heat is retained in the wet insulation longer and is released slower into the atmosphere. Most IR scans are done at night in order to capture this thermal signature of wet insulation trapped in a roofing system. It is common to precisely mark these damaged areas of wet insulation with spray paint on the roof surface. A CAD drawing is then produced identifying wet areas throughout the roof sections.

There are some limitations to IR scans. Ponding water or any precipitation within the last 24 hours prior to the scan may lead to inaccurate readings. IR scans will only detect moisture in the top roof system. If there are multiple roofs on the building and moisture is trapped in the lower roof, an IR scan will not detect this moisture.

It is important to remember that IR scans work on the principle of solar gain and temperature difference. When multiple roofs are on a building, the trapped moisture in the lower roof never acquires the heat it needs to be detected by an IR scan. Additional constructions that can produce false readings with IR scans include ballasted systems, lightweight concrete decks, and roofs with highly reflective roof surfaces.

Nuclear scans use a nuclear gauge to detect various levels of hydrogen ions trapped within the roof system. The readings displayed by the gauge are a measurement of the quantity of hydrogen ions that are present within a detectable area beneath the gauge. Since hydrogen ions are present in water, these readings can be correlated to moisture content once a base line reading for a dry area has been established. The readings are used to create a map of the wet areas on the roof plan, which again show the location and outline of the suspected wet areas. Areas with wet insulation will have greater concentrations of hydrogen than those with dry insulation. This method of data collection shows where the moisture level is highest, allowing the source of the leak to be more easily determined.

Obviously, more data points will provide more accurate information, but will also take longer and therefore be more costly. An experienced technician often narrows the grid pattern in areas with wet insulation to better pinpoint problem areas. A core cut is taken in areas with the highest readout to verify moisture.

The nuclear readings can miss small areas of wet insulation because the actual readings are taken on a very small proportion of the total roof. Taking nuclear scans on larger roofs will take significantly more time than taking infrared scans. However, nuclear roof moisture surveys are performed during the day, and are not affected by debris on the roof, winds, or reflective roof coatings.

Electronic Field Vector Mapping (EFVM) takes a different approach when it comes to nondestructive moisture tests. Whereas the goal of infrared and nuclear scans is to locate wet insulation, the goal of EFVM is to locate the point where moisture can enter a roof system. EFVM begins with a grounded wire loop around a given roof section – typically 5,000 to 20,000 square feet. A technician then applies water over the surface of the test area, using the water as a conductive medium. A low-voltage, pulsating electric charge is created between the nonconductive roof system and the conductive structural deck.

Watertight roof systems will isolate the difference, whereas a puncture or point of entry will cause an electrical connection to occur. Trained technicians can read the directional flow of the current and pinpoint the exact point of moisture entry into the roof system.

One advantage of EFVM is that once the point of entry is detected, it can be repaired and then retested the same day to ensure that the leak point has been repaired accurately. Although EFVM can be used on a variety of low slope roof systems, it is most often used on roofs where finding a leak poses difficulties, such as vegetated roof systems, ballasted single plies, and inverted roof membrane assemblies.

Although the most nondestructive tests are commonly performed on aged roof systems, many design and roofing professionals are now requiring nondestructive tests on newly installed roofs as a measure of quality assurance. Some manufacturers require them as a condition of the warranty. This requirement is written directly into the roofing specification and virtually guarantees that the newly installed roof is sound, watertight, and contains no trapped moisture.

As with many advanced technologies, quality people are just as important as great technology. Trained and qualified professionals are needed to perform these tests and interpret the results. Similarly, a design professional or trained roofing expert must then use this valuable information – in combination with core cuts and visual inspections – to create a game plan that maximizes the building owner’s roofing investment.

The medical profession has used advanced imaging techniques for decades to pinpoint problems and keep us healthy. Similar technology is now available for building owners and facility managers to help extend the life of their roofing assets. Require a nondestructive scan before you replace your next roof and you will likely save thousands of dollars.

Brian Lambert is director of products and systems for The Garland Company, Inc. He has been active in industry initiatives since 1993. He is frequently a guest speaker at architectural and building maintenance seminars, and has written many articles on roof system performance.